Greetings from the Festival

Hello to all, hope you are all safe and keeping that Celtic sparkle in all your eyes. Lots of things happening out of the Australian Celtic Festival HQ. Firstly, want to send much gratitude to the wonderful Australian Standing Stones Management Board for organising the magic afternoon to celebrate Tynwald Day the past Sunday July 5th. It was a perfect Glen Innes afternoon, sun shining over the Standing Stones casting long winter shadows over Centennial Parklands, pipes and drums sounding out between bird song.

Chairperson of the ASSMB Judi Toms kicked off proceedings with a wonderful introduction to the meaning of Tynwald day, a little history and fun facts as well. There were special readings of well wishes sent from the President of the London Manx society Alastair Kneale as well as the honour of a letter from the President of Tynwald, The Hon Steve Rodan OBE MLC ,whose letter we have reprinted for you all to see. It was quite an honour to receive such a wonderful greeting and acknowledgment from the President of one of the longest unbroken parliaments in the world. There was also some poetry from Wordsworth as well as a reading from one of our resident poets Mike Gilbert member of the Caledonian society. Once the opening ceremony friendship flame cauldron was lit and the Isle of Mann flag lowered, official duties were over and it was time to celebrate with the friends and visitors who came to the Australian Standing Stones that Sunday to help celebrate with some warming traditional stew, delicious bonnag and an elixir for toasting, the aromatic glogg a traditional mulled wine perfect to celebrate with. By the smiles, raffles, conversation and empty plates, the afternoon was a huge success and a heart-warming connection to one of our celebrated Celtic nations.

Tynwald Day Celebrations and letter from the President of Tynwald. 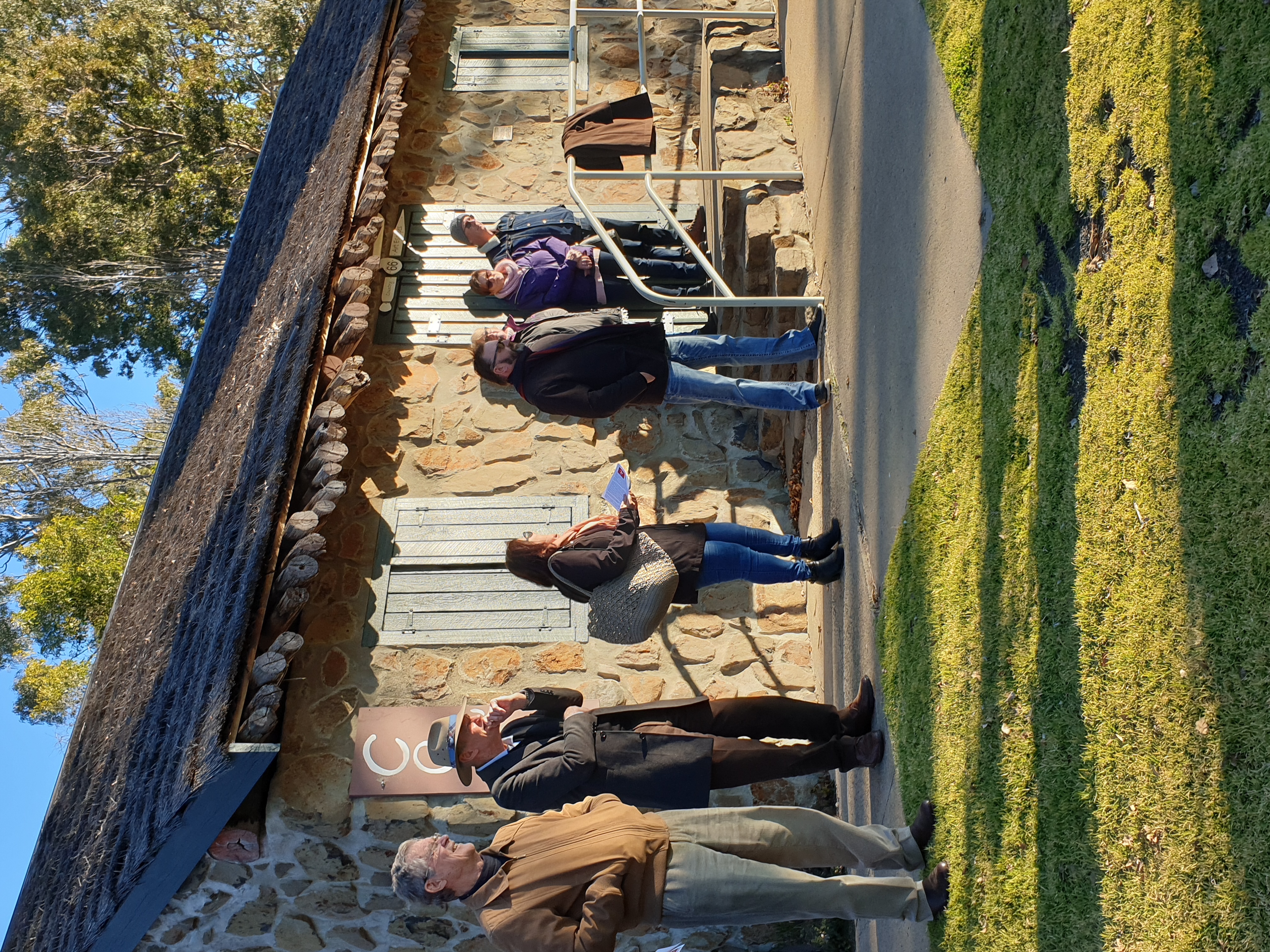 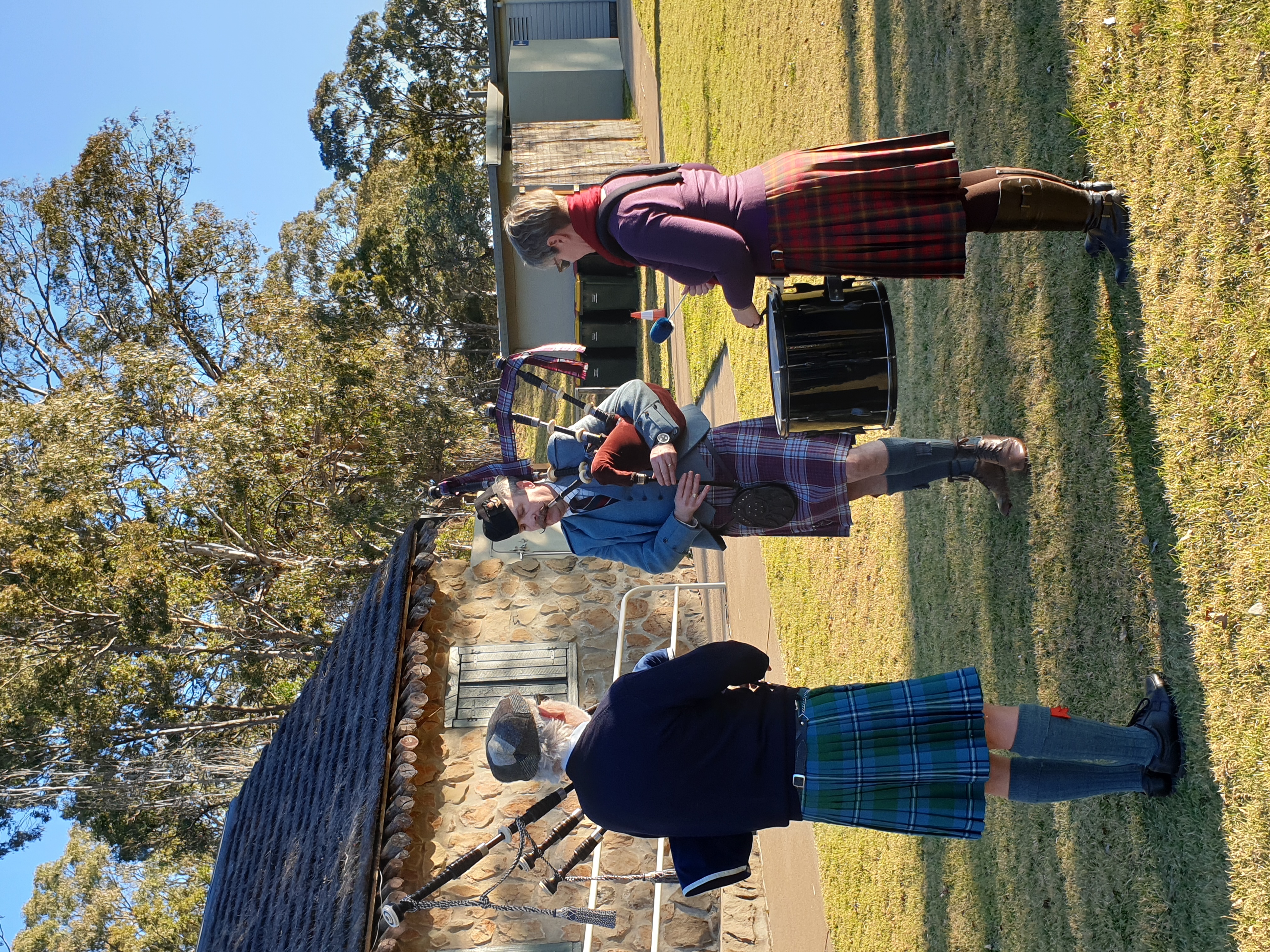 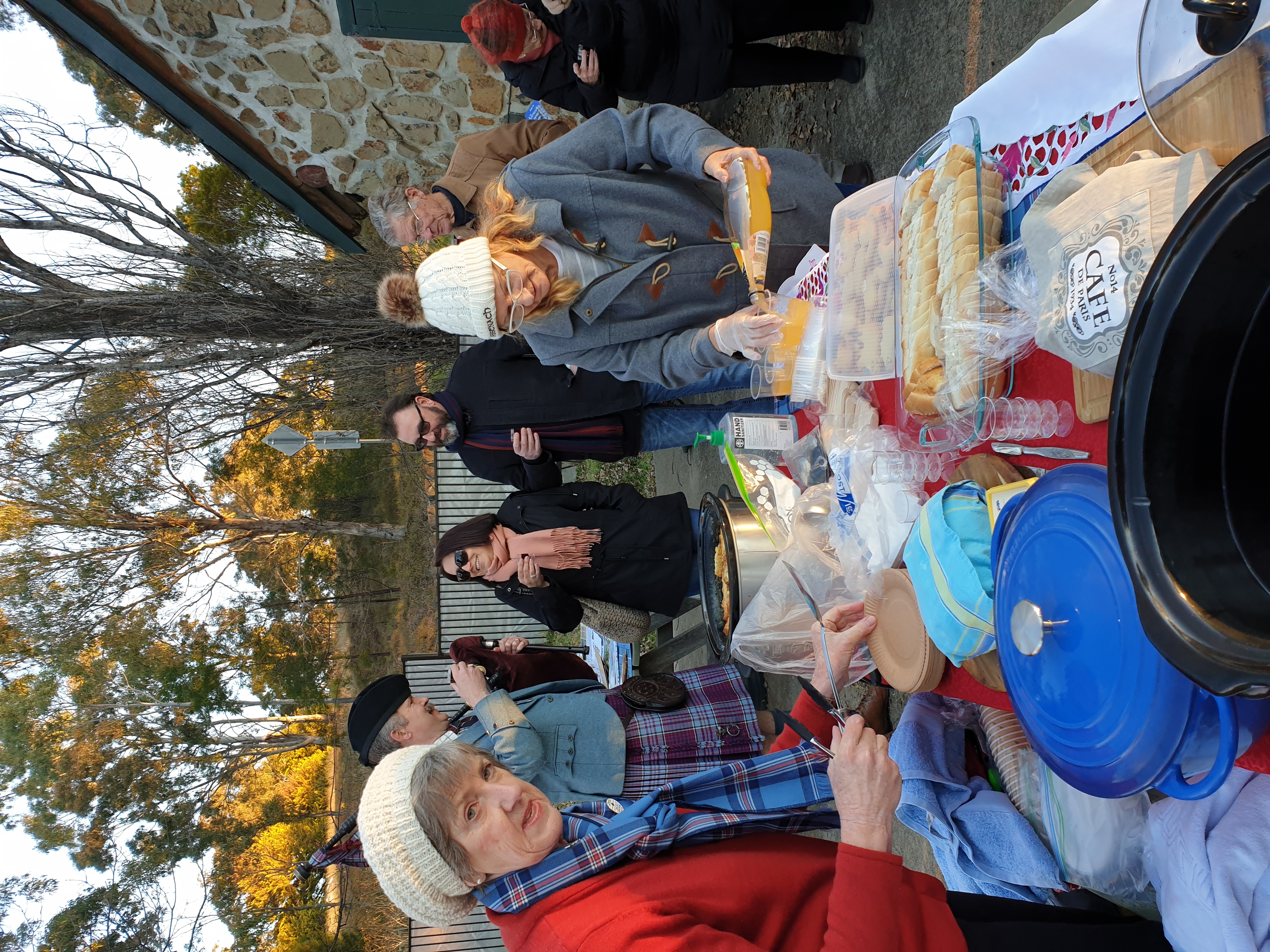 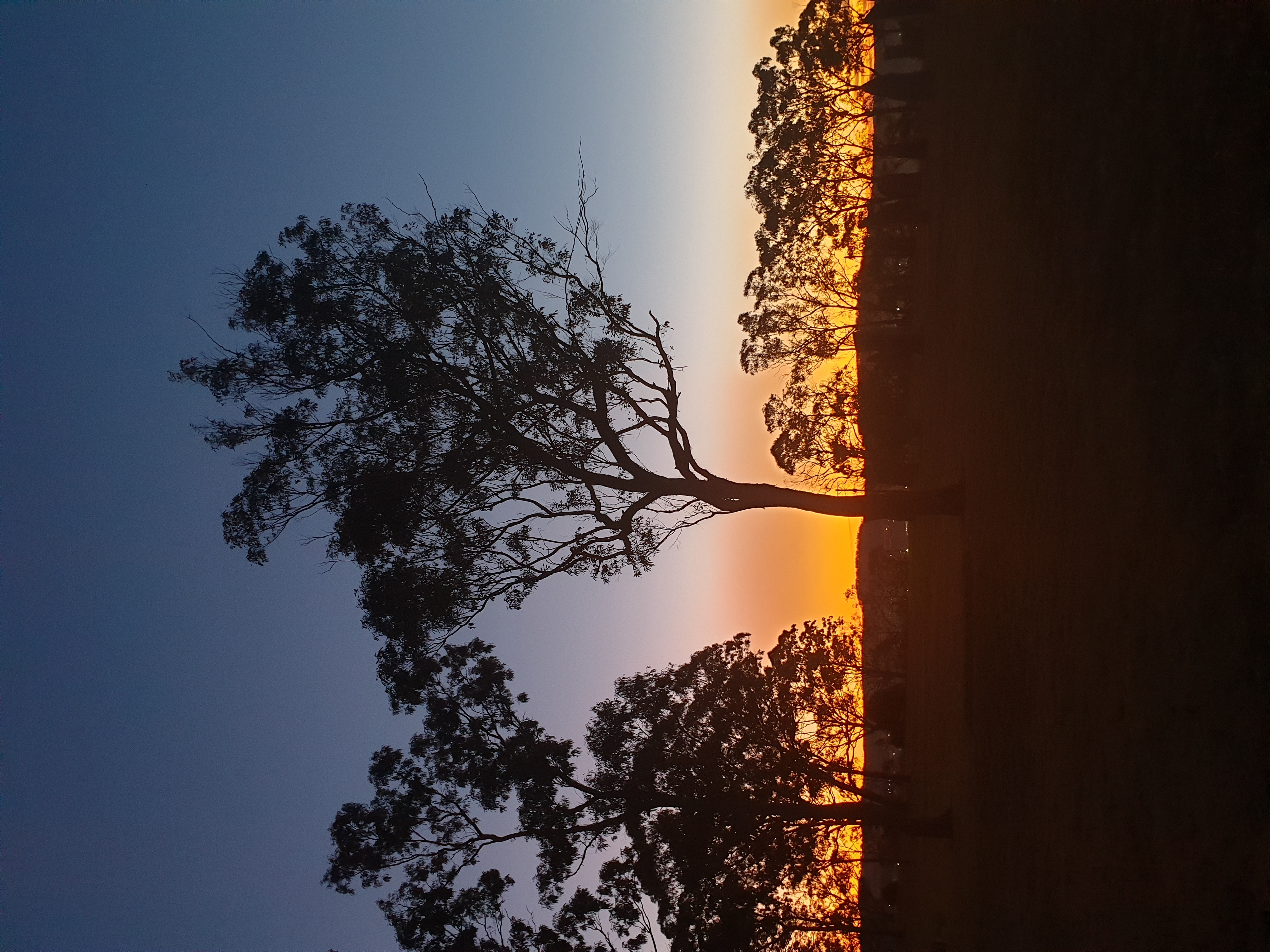 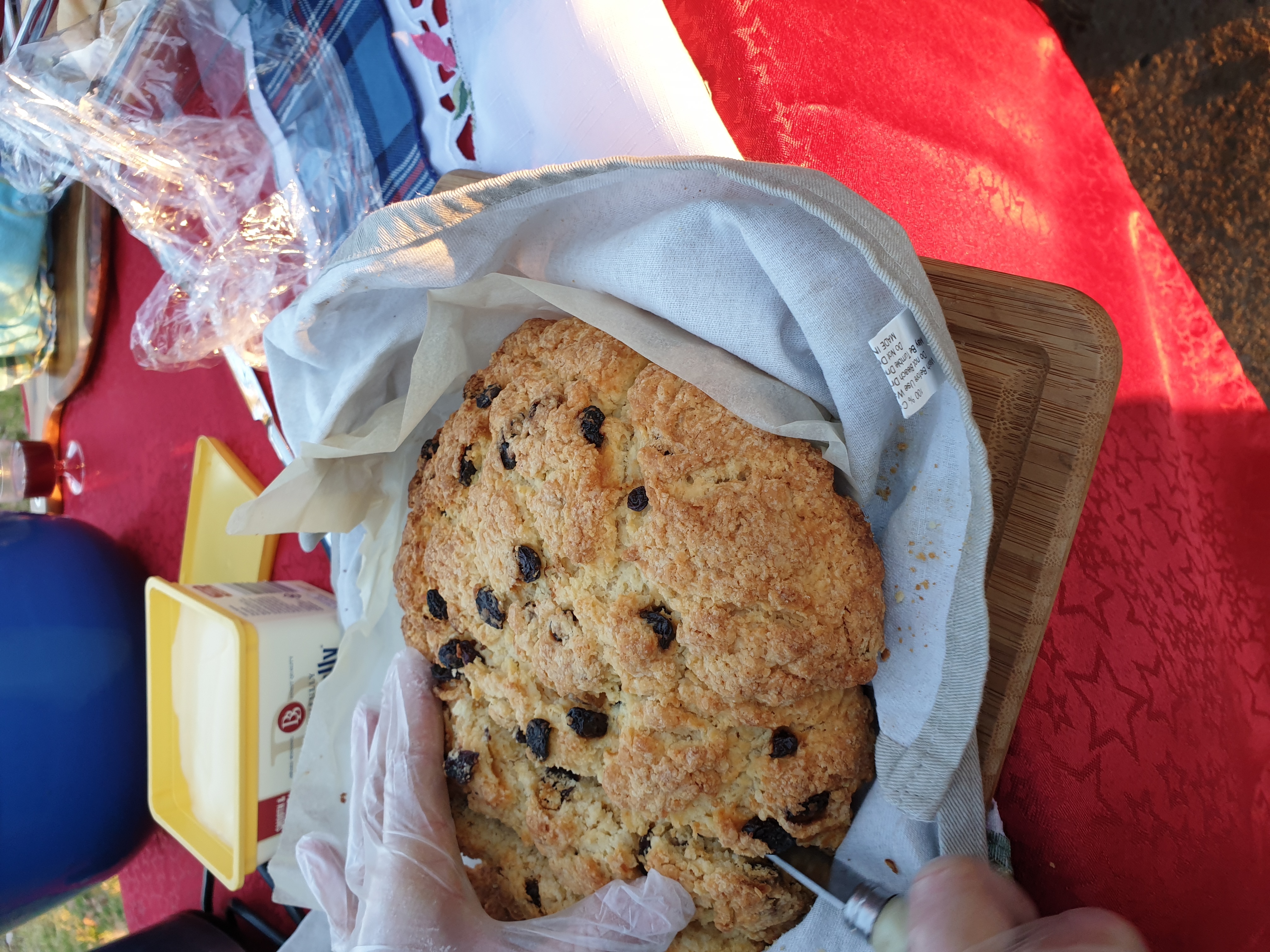 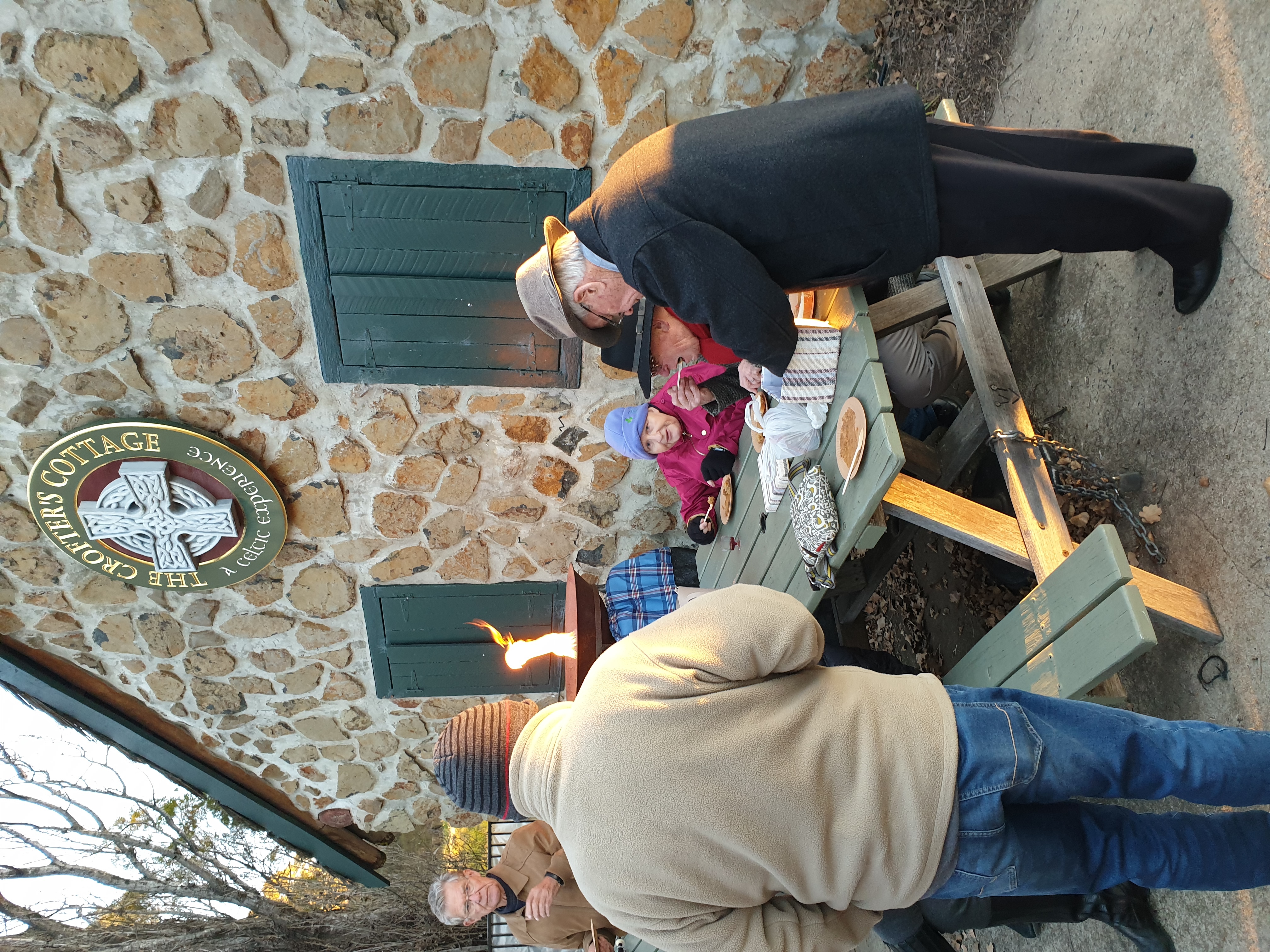 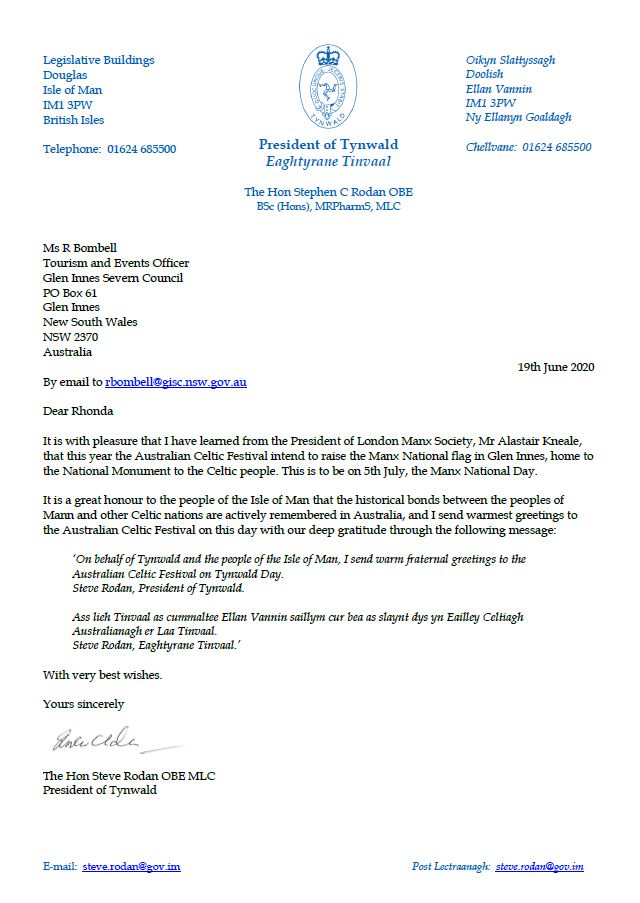 We are often asked why Glen Innes Highlands is often referred to as ‘Celtic Country’. The area’s first settler was Archibald Boyd, a barrister from Selkirkshire in Scotland. He established what is now called Stonehenge Station in 1838. He was soon joined by other settlers from Scotland.

People such as William Vivers from Dumfriesshire who settled on the massive Kings Plains Station estate that covered close to 30,000ha. His grandson, Dr George Vivers, wished to create a little piece of Scotland in the Australian bush and so built a castle on the property – which is still there today, visitors can stay at the Kings Plains Castle bed and breakfast – well worth a visit. 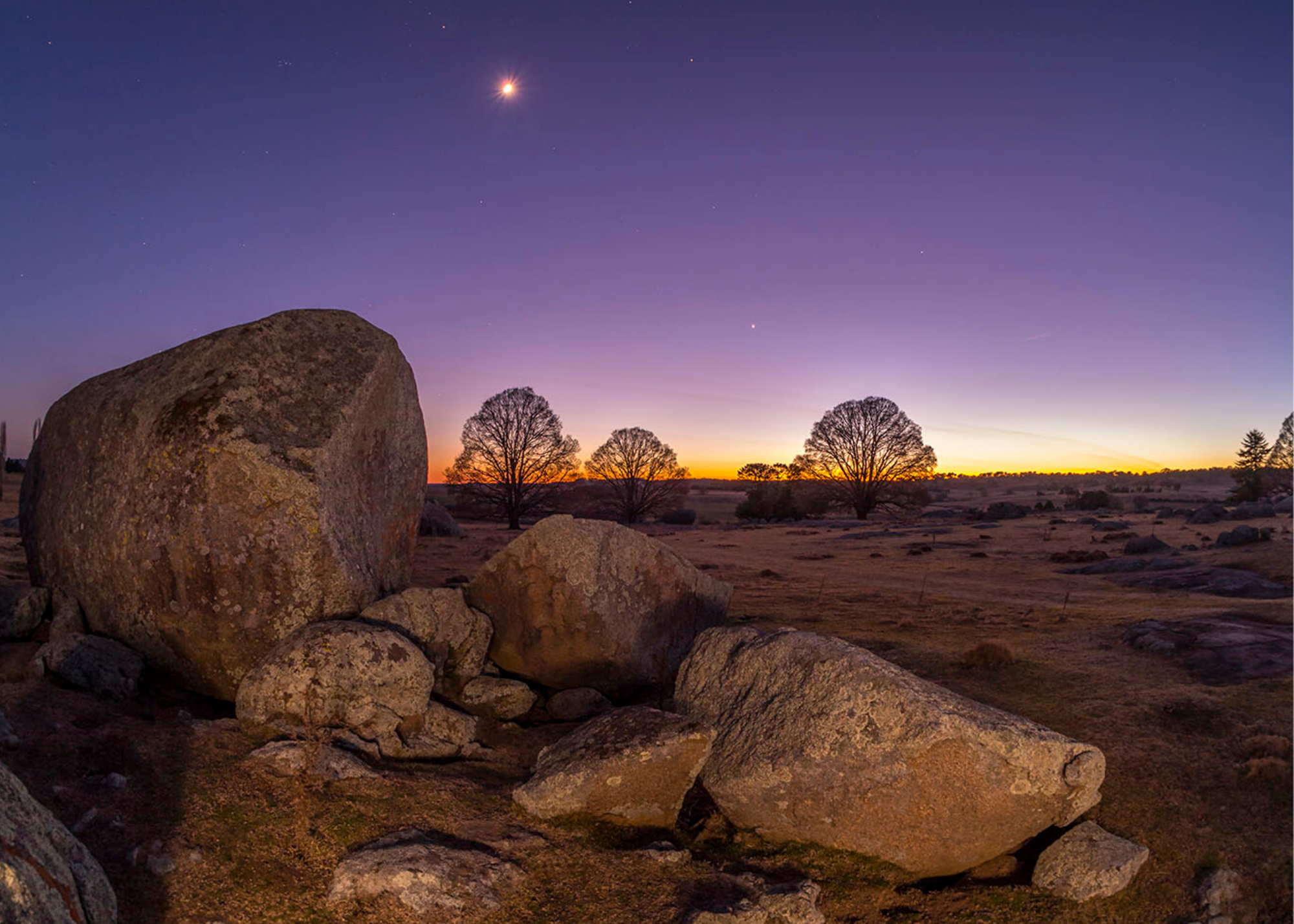 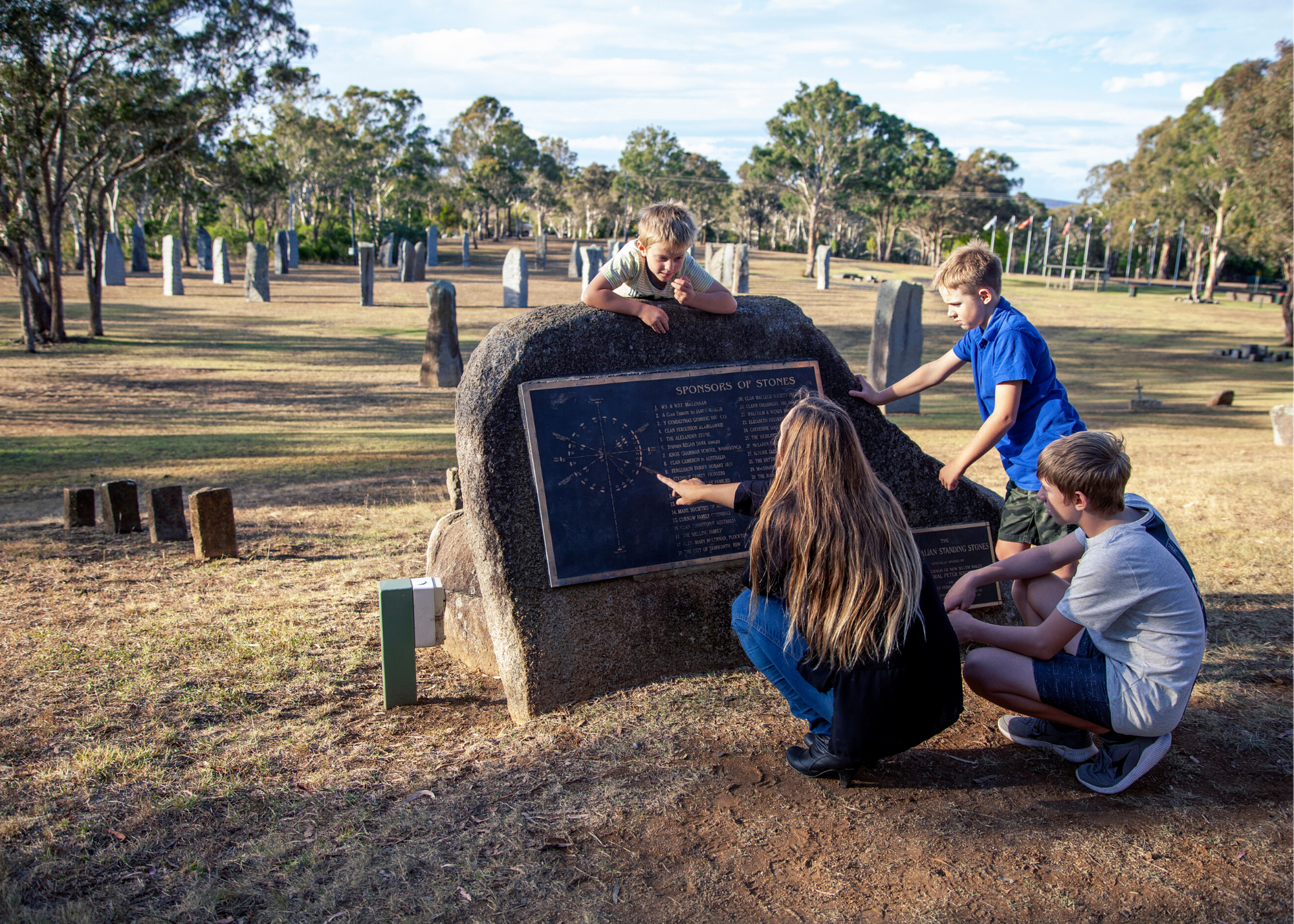 Glen Innes got its name from another Scot, Archibald Clunes Innes, who arrived in Australia in 1822. The town of Glen Innes was gazetted at the height of the gold rush in 1852.

Today, Glen Innes citizens cherish the area’s Celtic heritage. A group of locals established the Australian Standing Stones, based on the megalithic structures found in the ancient Celtic world. They are unique in the southern hemisphere and have been officially recognised as the national monument to Australia’s Celtic pioneers.

It’s only natural that the Stones are the venue for the annual Australian Celtic Festival.

The submission proved successful and the array was declared a national monument in the National Trust of Australia (NSW) Classification Report dated 5 February 1998.  A classification such is widely recognised by government as identifying the significance of a place or item to Australia’s heritage.

A Feature of the Centennial Parklands site – Home of the Australian Standing Stones. 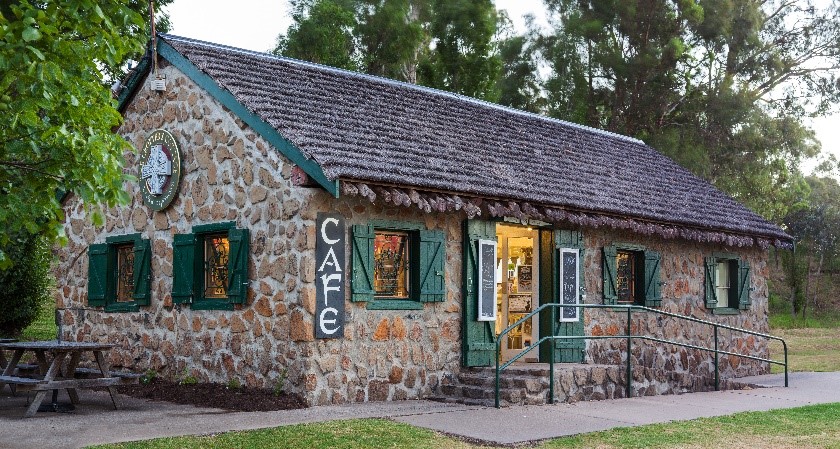 The Crofter’s Cottage is situated to the south east of the Standing Stones site and was built to add Celtic atmosphere.  It was opened in 1994.

A croft is usually a small area of arable land.  A crofter is one who farms the land.
In Gaelic, the cottage is known as ‘taigh dubh’ (ta-ee-duv) or black house.  Peat was traditionally burnt and caused the inside of the cottage to be black.
The Glen Innes Crofter’s Cottage has a thatched roof atop the roughly cut stones.  It was built from photographs of Old Leanach Cottage that survived the battle of Culloden on Culloden Moor.

At the end of January, Scots celebrate their finest poetic son with a sheep’s stomach busting meal of haggis, neeps, nips and a dose of verse. However, in the aftermath of the Burns supper season, there is another stalwart of the Celtic calendar that promises a good time with dodgy poetry. Sir William Topaz McGonagall is fondly remembered as “The World’s Best Bad Poet”, with some justification.

Born in Edinburgh in 1825 – a scant 29 years after Robert Burns’ death – he spent his childhood in Orkney, then Dundee where his father travelled to find work with his handloom. It was in Dundee at the age of 52 that he claims he heard the voice of his muse imploring him to “write, write”. Sadly for us, he did, writing such excruciating works as An Address to Shakespeare, which begins thus:
“Immortal! William Shakespeare, there’s none can you excel
You have drawn out your characters remarkably well.”

It’s a longish poem, but I’ll spare you the rest instead wonder at the talent behind another of his poems The
Christmas Goose:
“Mr Smiggs was a gentleman
And he lived in London town:
His wife she was a good kind soul
And seldom known to frown.”

McGonagall put his fame down to two events; his visit to Balmoral to pay homage to Queen Victoria, and his Tay Bridge poem. He was a devotee of the Queen and wrote several verses, his quest for rhyme prompting him frequently to pay a backhanded compliment:

“Oh! it was a most gorgeous sight to be seen,
Numerous foreign magnates were there for to see the Queen;
And to the vast multitude there of women and men,
Her Majesty for two hours showed herself to them.”

With this rare instance of Royal indecent exposure to hand, McGonagall went north, to present his personal compliments. “You’re not poet to Her Majesty,” said the well-read constable on duty at Balmoral. “You cannot deny that I am: patronised by Her Majesty,” declared McGonagall unconscious of the irony. Thereafter he styled himself, “Poet to Her Majesty”.

McGonagall was mocked even in his lifetime – often being pelted by rotten fruit during poetry readings – but his eccentricity has ensured he is remembered fondly by many. His poetry has been translated into many languages and is still read today.

And where Robert Burns has a serious evening of speeches and Scottish fayre, a McGonagall Supper is more light-hearted. These are, like the poet himself, eccentric, beginning at the end and ending at the start.
The main idea is to begin with the whisky, Ode to The Dundee Cake, speeches and pudding, then move onto the main course before finishing up with the soup or entre. A strange evening, but I’m sure you’ll agree, a fitting tribute to the World’s Worst Bad Poet.

And on that note, may I leave you the Sunlight Soap poem. It’s a classic of the genre and McGonagall’s only income raising work. McGonagall was richly rewarded for his efforts, receiving a fee of two guineas from the manufacturers.
You’re best reading it lying down with a wet towel round your head and a large dram in your hand:

You can use it with great pleasure and ease
Without wasting any elbow grease;
And when washing the most dirty clothes
The sweat won’t be dripping off your nose
You can wash your clothes with little rubbing
And without scarcely any scrubbing;
And I tell you once again without any joke
There’s no soap can surpass Sunlight Soap;
And believe me, charwomen one and all,
I remain yours truly, the Poet McGonagall.

Other News and Updates

Next month we’ll have more updates for you on the 2021 Australian Celtic Festival – Year of Ireland & Isle of Man as well as more featured articles from our guest editors.